As a pescatarian, I just love things like hummus so watch out for some lovely recipes for spreads, patés and dips over the next few weeks. I used call this one a mousse although it really is not a mousse as there is nothing to make it fluffy but it's not thick enough for a spread (though I eat it on bread for my lunch) or paté and so much more than a dip. Can't wait for lunch tomorrow!

Update February 2018: I have finally turned this into a mousse! You could whip up 3-4 of egg whites and fold them in but if you don't have any use for the egg whites that's not going to happen, is it? Well, I've discovered aquafaba, the liquor from tinned pulses (you can also make your own but since there are just two of us I prefer to use tins), which can be beaten into stiff peaks that don't taste "beany" and can be used instead of egg whites. So, if you want to turn the recipe below into an mousse, beat the liquor of a 400-g-tin of any pulses (approx. 120-150 ml) into stiff peaks and fold them into the cooled down carrot puree.

1. Cook the carrots in as little water as possible with pepper and salt until soft. I managed to have less than a tablespoon of liquid left, tonight ;) Drain and leave to cool.

2. Put all the ingredients into a food processor or beaker for a hand-held blender and purer.

Serve with crudités, on bread, steamed or roasted veg, even fish. Delish! 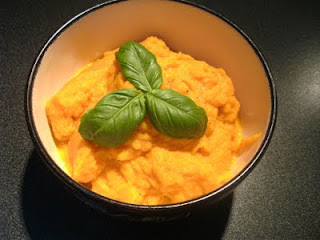