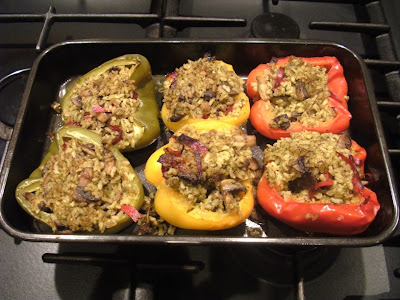 After spending two afternoons cooking, it seemed like a good idea to pull some of the creations together into a main course. With the right preparation, this can be a FastFeast - at least when it comes to throwing it together.

1. Season the inside of the peppers with a little salt.

2. Heat a little olive oil in a non-stick pan and sauté the chillis for a minute or two, then push to the side and add the mushrooms. Fry the mushrooms at a high heat till they're brown taking care the chillis don't get burned. Mix both chillis and mushrooms and season with a touch of salt.

3. Meanwhile, mix the rice with some rocket pesto.

4. When the mushrooms are done, take of the heat, add the rice and mix well.

Serve as a vegetarian main course or as a side to fish/meat with a salad. I had a bit of that raw beetroot salad left from yesterday which made a colourful addition to the peppers. 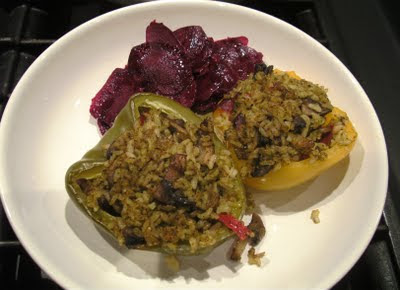