There is some truly wild rocket growing in our garden. I planted it from seed using a packet of 'wild rocket' for the first time about 4 years ago and got a really good crop the first year. After it flowered, it self-seeded in a well-behaved manner in the first year, i. e. it just sprung up again in the same area. From then on, there was no containing it, which is partly my fault as I couldn't bear tearing it out from between the flagstones of the seating area. The last couple of years that wasn't so much of a problem as I harvested it continually and some of it got trampled by us and friends we had over for BBQs. But this year it's rained so much, we've hardly used the garden so it's been left to grow where it wants. I keep harvesting it but, to be honest, it's gone rampant. This afternoon, however, I felt a cull was really unavoidable. I gave my heart a push and started pulling the rocket plants out, roots and all. After cleaning it, I had 135 grams - some of which you'll see in the Grapefruit & Avocado Salad we had as a starter tonight. But approx. 100 grams went into a rocket pesto. This recipe is based on/inspired by the rocket pesto recipe from Sophie Grigson's 'Sunshine Food', one of my all time favourite cookbooks.

Alright, my blurb says that there'd be dishes I invented and here, for the second time in as many days I'm posting a recipe from a cookbook. Why? Because creating some recipes from scratch would be like reinventing the wheel. So why not take advantage of what's already out there and tweak if necessary? That's what I've done here. And, pardon the pun, I think this rocket pesto simply rocks ;) 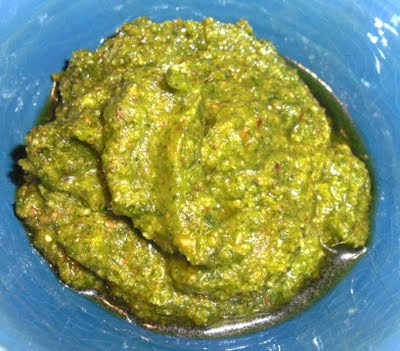 Whiz all the ingredients in a food processor until you get a smooth pesto. Use what you need and transfer the remainder into a sterilised jar and top with olive oil to seal.

I only own an upright blender, which I use for my breakfast smoothies, and a hand-held blender and they're both really hard work, if not useless, as there is not much liquid to work with here. So I'm finally going to invest in food processor! 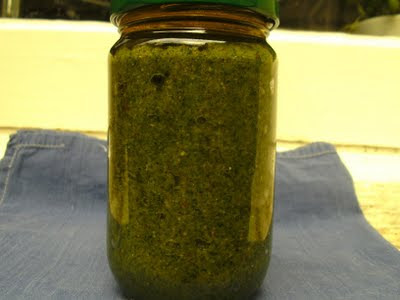 Variations:
1. Use hazelnuts - as per Sophie Grigson's recipe.
2. A few weeks ago, I used toasted pine nuts but I have to admit that I prefer the pesto with almonds.
3. Use basil and toasted pine nuts to make a classic pesto.
Posted by Rebekka Groß at 20:35