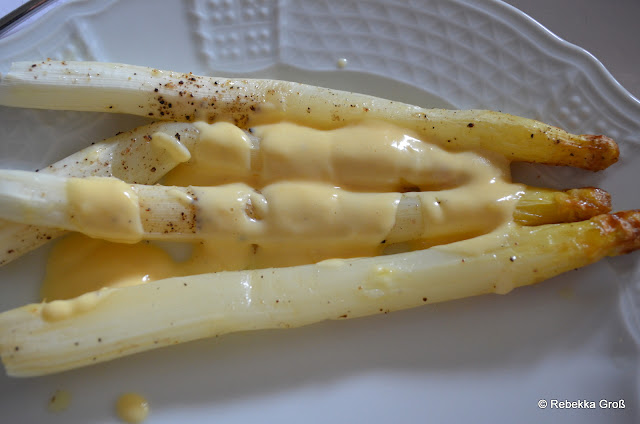 I've just returned from a few days in my home state in Germany where I was just in time to catch the end of the asparagus season. White asparagus is not readily available in Scotland and it'd been three years since I last tasted it. Even though it wasn't that cheap I bought nearly two kilos of the stuff, enough to accompany two meals.

My godson love asparagus with an Hollandaise sauce but is generally happy with the powdered stuff enriched with an egg yolk and/or some cream. He also thinks the world of my cooking so I decided to  give him and the rest of the family a treat: homemade Hollandaise sauce!

It's been decades since I last made it and without any internet connection we first checked my mum's sparse selection of cookery books – no joy – then phoned around without reaching anyone nearby. In the end, we spoke to my other half's sister in London who did an internet search and, knowing we like Jamie Oliver, gave us his recipe, which I modified as I simply couldn't bring myself to make a sauce, in which two servings were made using 2 egg yolks and 100 g (!) of butter. Admittedly, that was probably meant as a main course but still...


Below's what I came up with. But first, we need to cook the asparagus. You can boil or steam it. I decided to put it in the oven.

Using a speed peeler, remove the skin from the asparagus and cut off the woody part at the bottom. Place the aspargus spears side by side in a roasting try. Season with pepper and salt and drizzles with olive oil or a little butter, if preferred. Cover tightly with tin foil and bake in a preheated oven at 200 °C/gas mark 5/175 °C (fan assisted) for 20-30 minutes.

First, boil the kettle. Then put a pan on the stove to melt the butter at a low heat so it would liquify but not brown, ideally in a saucepan with a spout. If not transfer the melted butter into a warmed jug.

When the water has boiled, pour it into a saucepan, approx. an inch high. Place a bowl on top, you don't want a bain marie, just the heat from the steam. Now, beat the eggs with the lemon juice and dijon. Then while continuously beating add small amounts of butter until the butter is all used up. Season to taste with pepper and salt.

Should the sauce split, add a tablespoon of very cold water and keep beating. This will make the sauce creamy again. In my case, the sauce was very thick so I added about 3 or 4 tablespoons of cold water at the end. 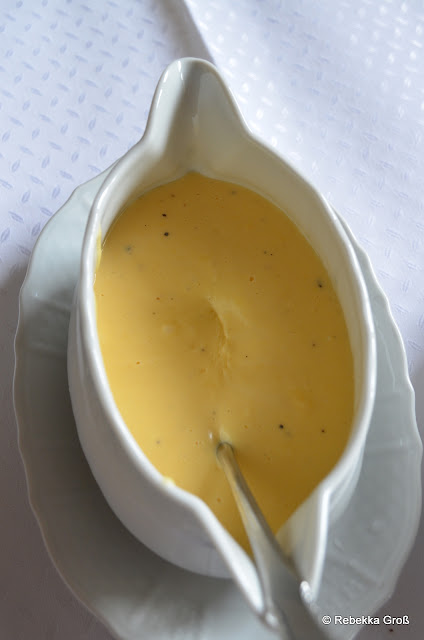