Baked Avocado with Feta and Lime 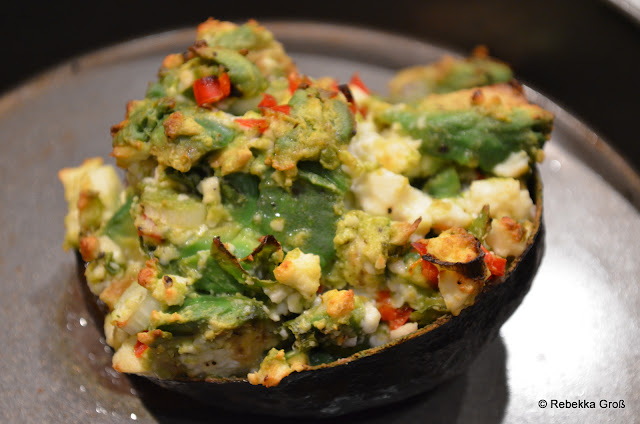 I've not had baked avocado in more than 20 years and have to admit that I'm not that fond of it. Yesterday, a post in my foodie group reminded me of baked avocados and since we had guests for dinner I decided to experiment and make this for the only pescatarian among us. Having been a vegetarian for more than two decades and only eating meat again for a few years I do not like for the non meat eaters to have "an empty space" on their plate. It turned out really well and since my friend let me taste it I think I may even make it for us in future.

As I always found baked avocado too rich I decided to use a salty feta cheese and lime juice to make it feel less greasy. Even before baking this looks absolutely delicious and I'm sure it would also be great uncooked.

When baking avocados it's really important that the fruit is very ripe. Otherwise, the baked result may be slightly rubbery in texture and may also taste bitter.

Half the avocado and remove the stone. Using a tea spoon, scoop the flesh out in small chunks. Drizzle with a little lime juice. Set the empty skins aside. Crumble the feta and add to the avocado. Thinly slice the spring onion and chili, if used. Season with pepper and salt and carefully mix. Check the seasoning adding more lime juice if required. Spoon the mixture into the avocado skins and bake at 220 °C/gas mark 7 for 15-20 minutes.

Posted by Rebekka Groß at 11:01 No comments: 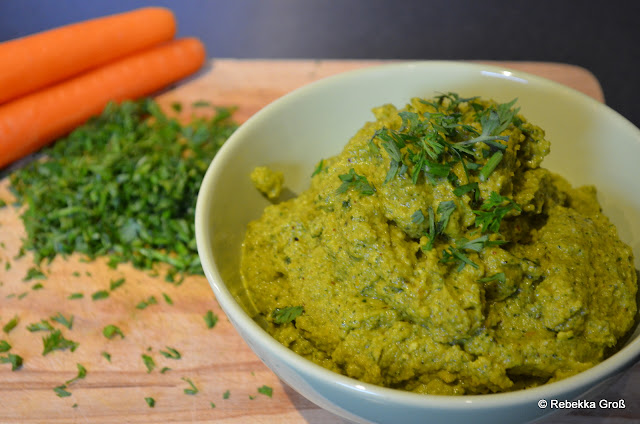 While I've used a small amount of feathery green carrot leaves when making stock I've often wondered if I could use them in larger quantities in other ways, such as pesto and salads. Last week, I bought some bunched carrots with the intention of making either one of these carrot pesto recipes. The tops were so fresh, I had to explore how they could be used and my fellow foodies in a Facebook group confirmed that it is indeed a very tasty herb and came up with all sorts of suggestions. While intending to still go ahead with my original pesto idea and intending to turn the leaves into a thick herb oil I changed my mind halfway through the preparation. The result is stunning. As I didn't loosen the pesto too much it's thick and creamy and will make a great sandwich spread. Next time, I buy bunched carrots I'll make carrot top pesto.

Cut the leaves off the carrots and trim off the stems from below the bottommost feathery leaf. Top and tail, then peel the carrots and slice them into 5 mm thick slices. Bring a pan with about an inch of water to the boil. Steam the carrots for 10-12 minutes until they are just tender.

Coarsely chop the carrot tops and place into a food processor along with all the other ingredients. Season with salt and pepper. Add a generous amount of olive oil and process to a paste adding more olive oil until the desired consistency has been reached. Check the seasoning, then put in the fridge until ready to use. If you're not eating all the carrot pesto over the next day or two, transfer into a sterilised screw top jar and top with olive oil to seal. This wy, it should keep in the fridge for a couple of weeks.

Posted by Rebekka Groß at 16:38 No comments: 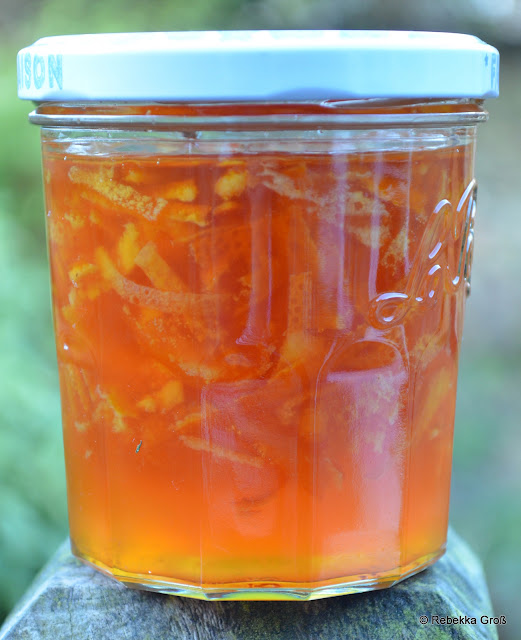 This year, I made marmalade for the first time and it turned out really well. Blood oranges are also currently in season and I bought 3 kg last weekend intending to eat and/or squeeze them. Well, we didn't eat as many as I'd hoped so I decided to turn them into marmalade as well. I researched recipes until my head was spinning then decided to use the same method I'd used for the Seville oranges but reducing the sugar. I was flying by the seats of my pants but the result is very, very tasty even though the marmalade is a little on the runny side and has the consistency of runny honey. Still, it's bursting with flavour though it's not as red as I'd hope because most of the oranges were more orange than red. 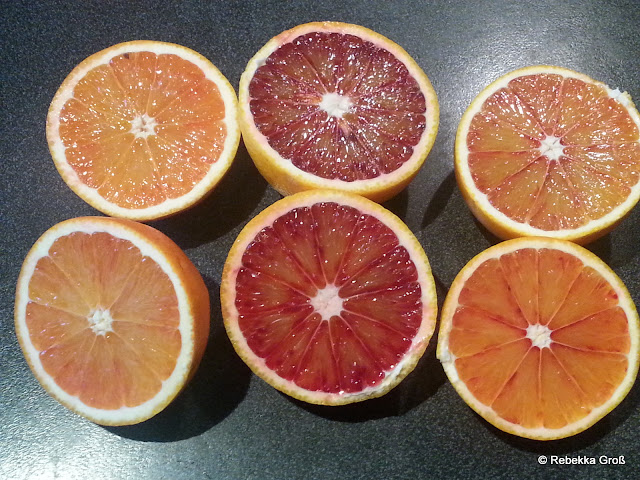 1. Place a couple of saucers in the freezer. Then, scrub the oranges and limes to remove the wax. Place into a heavy saucepan and simmer for approx. 3 hours until the fruit is really soft. Leave to cool over night.
2. Do not discard the cooking liquor. Half the oranges and limes and scoop out the flesh into a large heavy based saucepan. Bring to the boil and simmer for half an our.
4. Discard the lime skins. Cut the oranges skins in half and with a metal spoon scrape out the pith, the skin should have a polka dot pattern on the inside. Discard the pith and finely slice the skin. Set aside.
5. Next, line a sieve with a muslin cloth and pour the cooked fruit pulp into it. Drain. Use a potato masher squeeze out to ensure none of the juices are lost.
6. Squeeze out the additional 3 oranges. Measure the fresh juice, juice from the cooked oranges and the cooking water. You need about 2.5-2.75 litres. Make up the difference with cold water. Place in a large heavy based pan. This should only be about half full. Add the sugar and orange peel. Heat up until the sugar has been dissolved.
7. Bring to a rolling boil and boil for 15 minutes. Remove from the heat and put a spoonful onto one of the saucers. Leave for 5 minutes. If it's set it'll wrinkle when touch. If not bring to a rolling boil again and boil for another 10 minutes. Repeat this process until the marmalade sets. Leave to cool for a few minutes, then add the cointreau if used. Stir.
8. Ladle directly into hot sterilised jars and screw the tops on immediately. I like to ladle/pour jams and marmalades into to ahalf litre pyrex jug and pour it into the jars. I also turn the upside down to ensure they seal.
9. Leave to cool and label the next day. 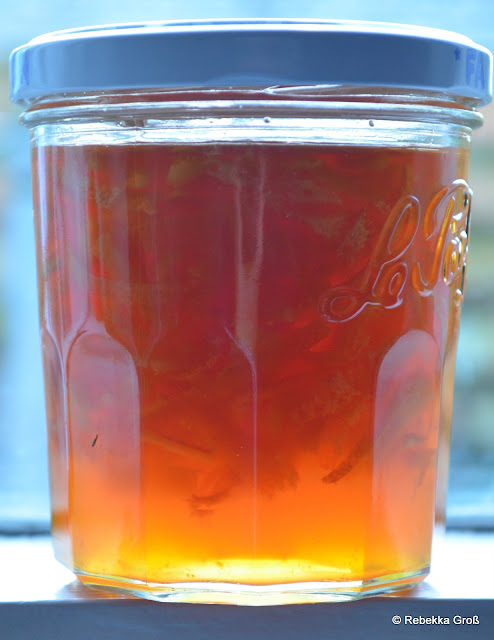 Posted by Rebekka Groß at 20:18 No comments:

I really like leek but don't make it that often as a side veg and if I do I tend to oven roast or barbecue it. The other day, however, I decided to sauté it. I'd planned to add mushrooms and a touch of soured cream and serve it with pasta but my other half wasn't keen so I kept it simple. Turned out it was delicious and we'll certainly make it again this way.

Finely slice the leek, wash and shake out the excess water.
Heat olive oil in a large frying pan. Sauté the leek over a high heat until the water has evaporated. Season with sea salt and black pepper. Keep cooking until the leek starts to brown. Turn down the heat and cook until soft. Drizzle with maple syrup and turn up the heat for a minute or two. Serve.
Posted by Rebekka Groß at 17:23 No comments:

When my mum mentioned a few weeks ago that my cousin had made a carrot and mango soup for Christmas I knew this was something I'd like to try out. I bought a couple of mangoes but never got around to ask him for his recipe. With the mangoes overripe and threatening to go off I made up my own recipe. The soup is quite fruity with a lovely hum from the chili. If you prefer it less sweet use just one mango.

1. Peel and slice the carrots and set aside. Peel the mangoes and cut the flesh off the stone. Place into a bowl. If the mangoes are very soft squeeze out as much juice as possible from the remaining flesh into the bowl.

2. Use the chili with or without seeds depending on how hot you like your food. Peel the onion, garlic and ginger and chop finely. Heat some oil in a large saucepan and soften the veg over a low to medium heat for 5 minutes.

3. Meanwhile boil the kettle and make the stock or heat homemade stock.

4. Add the carrots to the saucepan and mix until coated. Add the mango. Season with pepper and add the stock. Bring to the boil then simmer for 20-30 minutes until the carrots are just cooked. Add the coconut milk, bring to a simmer and simmer at a low heat for 5 minutes.

5. Blend the soup. Check the seasoning and serve sprinkled with fresh herbs or toasted seeds.
Posted by Rebekka Groß at 13:01 No comments: